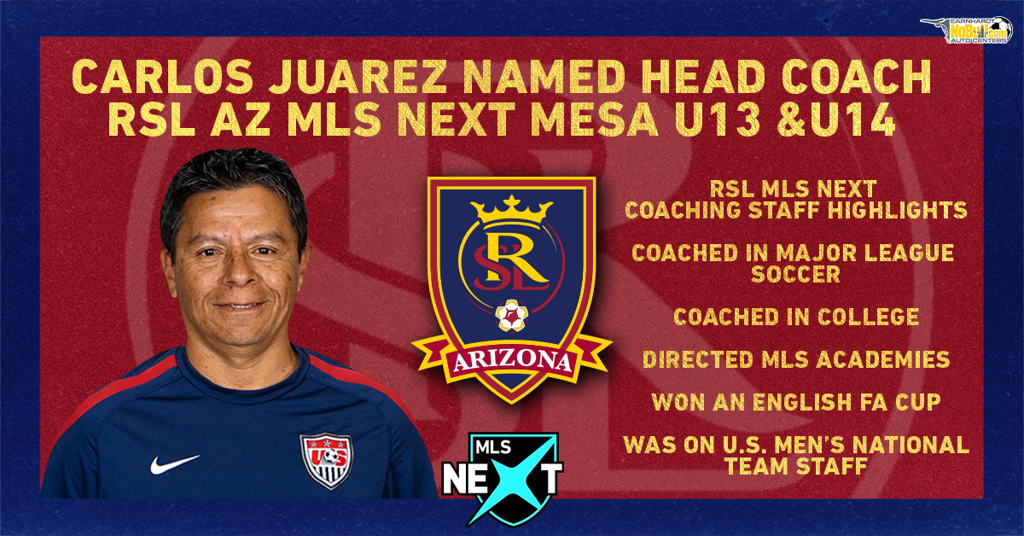 PHOENIX (Thursday, June 23rd, 2022) -- RSL AZ MLS NEXT announces the hiring of Carlos Juarez as the RSL AZ MLS NEXT Mesa U13 and U14 head coach. Juarez has more than 30 years coaching experience from the youth ranks up to the professional side of the game and internationally with U.S. Soccer.

On the professional side, Juarez served as an assistant coach for Major League Soccer's Chivas USA and was the head coach for the Women's United Soccer Association's San Diego Spirit. With youth, Juarez has served as the Technical Director for Cal North and the Arizona Soccer Association, where he guided the 2006 boys to a U13 2019 US Youth Soccer ODP West Champions title.

"Carlos is a tremendous addition to close out the head coaches slate for RSL AZ.  His background and experience put him in a very rare group of coaches," said RSL AZ Brent Erwin. "Carlos has been at and thrived at every level in the game from the U.S. Men's National Team, Chivas USA, U.S. Soccer Youth National Teams, Women's Professional teams, and as a coach educator for the U.S. Soccer Federation.  He is among the very best the U.S. has to offer and we are so appreciative to have him with the RSL AZ MLS NEXT program in Mesa. Carlos knows what young players need to learn and develop and he will also lead the expansion of RSL AZ as we take our first steps into the professional side of the sport for our young men in the region.  The head coaching slate for RSL AZ MLS NEXT is Juan Fresquez, Paul Rideout, Carlos Juarez and Jordan Rideout.  I cannot see how it can get any better for players than this group of men.  We have committed to growing and improving our staff for the MLS NEXT program and we are fortunate to have done more than we could have expected.  In these head coaches we have people who have done the following below. We are excited for the kids to work with these men."