December No Bull Student-Athletes of the Month Announced 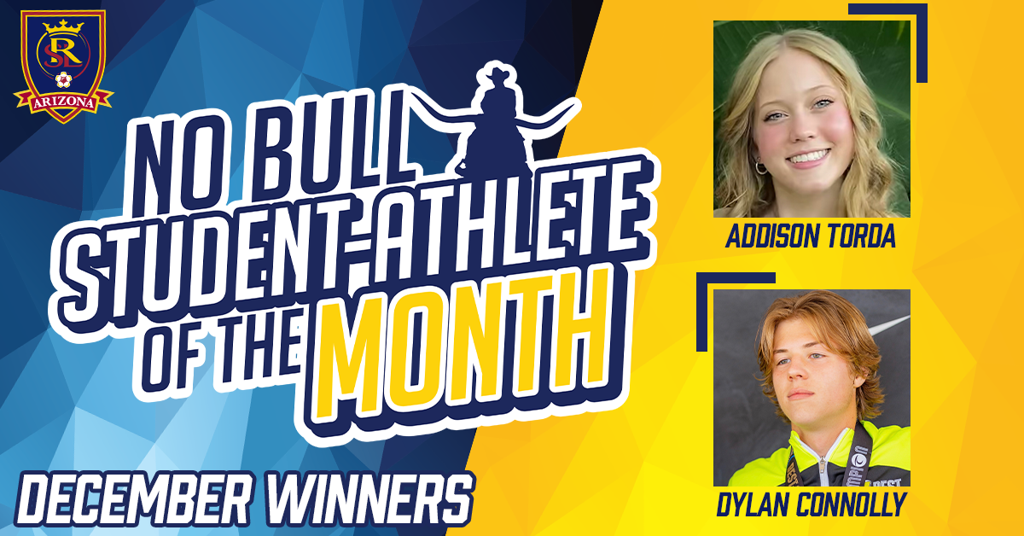 A big congrats goes out to Dylan Connolly (RSL AZ MLS NEXT 2006) and Addison Torda (RSL AZ North 07 Girls) who are the December Male and Female No Bull Student-Athlete of the Month winners.

Dylan attends Arizona College Prep High School where he maintains a 4.72 GPA while leading the Investment Club and participating in the National Honor Society. On the field, Dylan has been an integral part of the back line for the RSL AZ MLS NEXT 06 team recording 8 clean sheets in 17 matches including a clean sheet against the #2 team in MLS Next. His presence has helped maintain the best goals against average in the conference.

"He encompasses everything that an RSL-AZ top student-athlete should have," said Jordan Rideout, RSL AZ MLS Next 06 Head Coach. "He is an amazing person, an excellent student, and a top player."

Addison attends Pinnacle High School where she maintains a 4.667 GPA while participating in the Red Cross club and Young Leaders Honor Society. On the field, she was the captain of her team that won the Presidents Cup Gold in 2022. She also plays up an age and competes for the 2006 DPL team.

"Addison is a leader. She is the first one at practice and the last to leave. She is captain of the team and uses that leadership position to offer a positive attitude and support the other players," said Dan Soutar, RSL AZ North 07 Girls Head Coach. "She demonstrates all the core values of RSL AZ."